Prevalence, Clinical Features and Comorbidities of Alcohol and Substance Use Disorders Among Patients Admitted to Psychiatry Outpatient Clinic

Method: In order to investigate the prevalence of substance use disorders among the patients who admitted to the general psychiatric outpatient unit and followed with any psychiatric diagnosis, 734 consecutive adult patients were included in this study. Michigan Alcoholism Screening Test–AD was administered to these patients. Substance screening form and SCID-I dependence module were administered to 47 patients (6.4%) who had a MAST-AD score above 4. Later, SCID-II and the rest of SCID-I were administered to 33 patients (4.5%) who met any diagnostic criteria on this module.

e-Sports become a part of our modern sport as it has entered our agenda in recent years, its popularity has increased rapidly and its mass of followers consists of young generation has reached a huge budget. In this review, the definition of e-Sport, historical development process, place in the world and our country, the spiritual and physical positive and negative effects on the individuals has been mentioned. Finally, it was mentioned about ergonomic changes and practical exercise suggestions to prevent possible musculoskeletal problems in e-Sport players. Scientific studies about e-Sports in Turkey is limited compared to other countries. With this study, it is aimed to eliminate the lack of Turkish resources related to this field which is developing day by day, to share the findings with the related health professionals and to contribute to the literature.

THE RELATIONSHIP AMONG NOMOPHOBIA, FEAR OF MISSING OUT AND DEMOGRAPHIC VARIABLES: EXAMPLE OF THE HEALTHCARE MANAGER CANDIDATES

Objective: The aim of this study is to examine the effect of the fear of missing out on the nomophobia, and to determine whether differences between these variables and demographic features.

Method: In accordance with this purpose, the students who were studying at the Department of Health Management in 2017-2018 autumn semester at universities in Istanbul were included in this study and data of  273 respondent were evaluated. Personal information form and FoMO and Nomophobia scales were used for data collection. Descriptive statistics, t-test, correlation and regression analyses were used in the data analysis.

Conclusion: It has been concluded that for future healthcare manager candidates, the fear of missing out on social networks is a predictor of nomophobia, also known as the fear of being deprived of the smartphone.

Long-term alcohol use causes varying degrees of deficit in various cognitive functions including learning, memory, visuospatial functions and abstraction. Studies using dif­ferent techniques indicate that the neocortex, particularly the frontal lobe; limbic system and cerebellum are the bra­in regions most vulnerable to the toxic effects of alcohol.

The aim of this study is to assess the memory function in individuals with a history of alcohol dependency who meet the criteria for at least early partial remission and to compare it with healthy controls. The study also aims to investigate the association of memory function with duration of abstinence.

As a result of this study, dependent subjects are found to show more deficit in attention and memory functions compared to healthy controls. These findings are consistent with the literature on this subject.

Objective: In this first study on the patients who applied to the Probation Ward in the Eastern Anatolian Region of Erzurum province, it is aimed to compare the sociodemographic data of the patients with the substance use characteristics and other legal crimes.

Method: Between December 2015 and February 2016, 132 patients who applied for the first time to the Erzurum DS polyclinic were included in the study. The sociodemographic data form prepared by the researchers participating in the research was applied.

Conclusion: Reviewing the sociodemographic data of individuals with probation application will guide clinicians in defining the group in which more preventive measures will be taken for substance use. 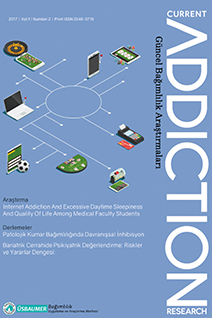 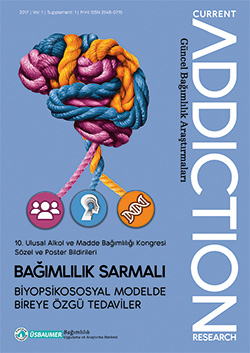